This post first appeared on my travel blog – as it focuses on economic questions about the wine ecosystem in British Columbia, I’m also reposting it here. It highlights the pressures to consolidate within the industry, the drivers of the sector’s proliferation, the challenges of resource use (water, biodiversity and food supply) as well as the growth of associated service industries.  If you want more recommendations about the wine region, check out this post. 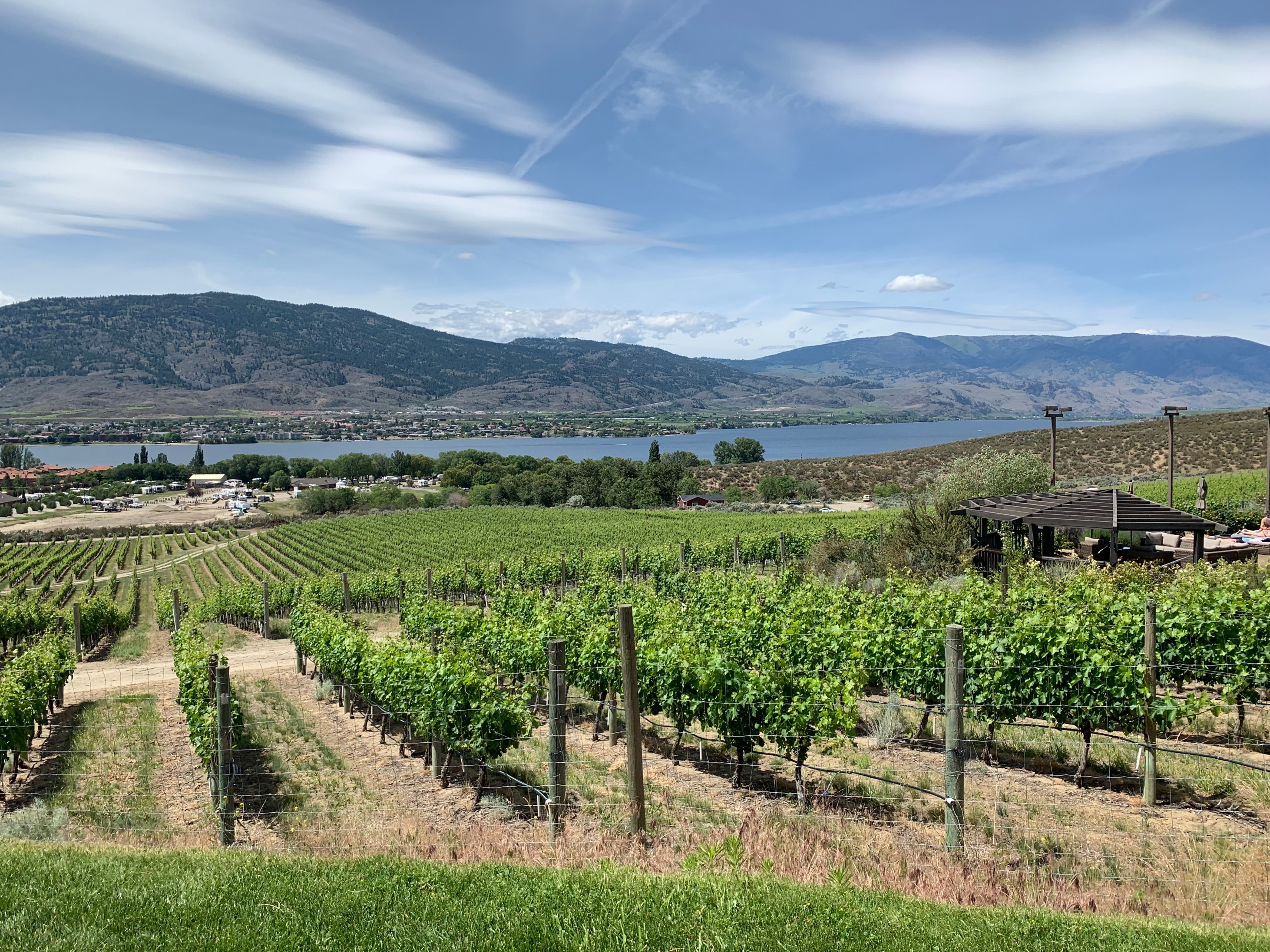 Earlier this summer I made a long-planned and oft-delayed pilgrimage to British Columbia’s Okanagan Valley, an underappreciated wine producing region in the central part of the province. The trip, which focused on the Oliver/Osoyoos area and Penticton and the Naramata bench, not only let me visit the home of many of the wines I’ve long appreciated, introduced me to some new ones, but also allowed us to experience a bit of the semi-arid ecosystem. Unsuprisingly, in true occupational hazard fashion, I couldn’t help pondering about the wine and agricultural economy, especially the current consolidation and expansion of the sector, development of the associated service sectors, as well as role in ongoing trade disputes and land use debates. This post will share some of these economic reflections and lingering questions.

Underappreciated? Or Late to the Party?

My use of the term underappreciated may seem misplaced. in fact I feel late to the party, given the development of the region. Over the last decade or so, my trips to Vancouver have often involved trips to the restaurants and VQA wine stores that scoop up much of the small production from the region and I have regularly used my duty free exemption to bring wine back. That said the region isn’t much known outside the area and wine connoisseurs. While there are a few big players, most producers are boutique wineries, that don’t produce much in excess for export. That is starting to change, via certain consortia who are trying to leverage wine competition victories to expand their global exports, especially to Europe and indeed, the region received a favorable writeup in the FT just a week before our trip.  The combination of production and associated tourism and services is an important part of economic activity in the region.

Proliferation and Growth: A Bit of History

Latest data suggest the province of British Columbia has almost 500(!) wineries, mostly in the Okanagan region, but also in developing areas of Vancouver Island, the Gulf Islands and Fraser Valley. The rate of growth has been incredible, with new wineries popping up every year. The Okanagan, long a fruit growing region (mostly stone fruit like peaches, cherries etc) continues to add significant wine growing capacity. Some of these wineries are very small and are effectively lifestyle choices – plant grapes, make wine, open a guest house or restaurant, especially for those looking to escape the big city life. However most are professional, some with links to California and French winemakers and taking advantage of the sizeable amount of winemaking human capital that has developed in the region.

While grapes have been grown in the region for some time, back in the 70s and 80s,  the story is that the implementation of the US-Canada Free trade agreement was a key turning point. With the prospect of grape and wine tariffs being relaxed… and those on other fruit products, some saw the benefit of moving up the value and quality chain via importing expertise and developing it locally. . As with Ontario, British Columbia has a highly regulated alcohol sales market, with dominant liquor stores being involved in purchasing and imposing fairly high taxes and tariffs. While some competition has materialized over the last few decades t,they remain highly regulated markets. As local wine industry has grown, some of the privatization has tended to come via targeted access for greater sales of local production – something that has contributed to a range of different trade disputes. Overall, the industry is primarily focused on value-added and higher quality rather than volume, though there are exceptions. Given the wide array of cheaper wine available from imports, helped by excess supply and production and structurally lower demand (especially in Europe) this calibration is likely to continue.

As wouldn’t be surprising, the success of the industry has sparked significant consolidation, at least from the perspective of ownership and distribution if not full management. Many of these buyers hail from Eastern Canada or the U.S. and several successful names have being purchased by larger players ranging from Peller estates, Constellation wines and many more. I say interesting form of consolidation as these acquisitions seem mostly to affect the distribution with little effort (as yet to consolidate operations. After all, buyers are interested in the brands and the different clientele.

Despite the consolidation the sheer number of wineries continues to climb. This likely reflects a few linked trends. 1) the industry and associated service industries (hospitality, tourism) is seen as a growth industry, where some other industries waned over the decades. 2) Many winery owners and workers who sell their operations, seem interested In re-entering the business, perhaps at a smaller, less commercial scale. 3) new regions see interest in the activity,

While the latter driver may ebb overtime as retirement approaches and the former suffer from competition, the answer may be growing the market via coordinated approaches of some of the wineries working together either as partners but independently owned consortia, or via ownership.

Still the current trend of consolidation raises some questions. How willing will buyers be to allow a stable of wineries to all produce similar varietals? Will there be further efforts to encourage specialization of one or two varietals while partners produce those best for their sub region. Will wineries under the same ownership collectively source their grapes, impacting the amount of estate production? These all remain to be seen, but it does strike me that the current consolidation risks triggering some cost saving moves.

Landuse and resource use debates

One of the highlights of the trip was getting to explore a bit of less cultivated plant life, especially in the semi-arid southern area close to Osoyoos where we took time out from wine tasting to identify cacti, sagebrush, wild flowers and some fauna (no snakes thankfully). It was also a good chance to learn a little more about the Osoyoos nation and some of the local differences that led to Nkmip, the first indigenous-owned winery (see other post). While theoretically not a desert (which involves even dryer conditions), the region experiences little rain, making the extensive growing an even more impressive feat. Unsurprisingly the region is experiencing climate change, with average temperatures high and dry, especially in the south, and extensive development reducing habitat and ground cover. While this may allow planting of heat seeking varietals in more northerly climes, it contributes to challenges of recurrent wildfires and the increased activity can put pressure on existing water rights.

Our trip came amid heated debate about whether a section of the Similkameen and Southern Okanagan be designated at a national park, adding to existing provincial parks and looking to protect some of the existing land from development. Since our visit the MOU has been announced, but the debate remains heated. We saw many No to Park signs – and the decision has been heated and may impact local developments.

We did see a number of wineries active in efficient water use (likely more efficient than the orchards which proceeded them – and biodynamic production. Interestingly given the limitations of electric vehicle infrastructure, we also saw a number of charging stations. It remains to be seen how these policies will develop and whether they are predominately for show.

Finally a note on trade issues and disputes, Looking back over that last decade, there have been a sizeable number of wine related trade cases taken to the WTO or NAFTA panels by countries like the U.S, and Australia, which labelled efforts to support local wine industry as protectionist. While a focus on wine restrictions may seem quaint at a time when national security objections are being used to restrict steel, Aluminum, Uranium, Titanium and possibly auto sales, its an interesting microcosm of local policy autonomy and protection, which it is, especially as wine sales move into grocery stores, where only local production is on display. These issues also bring to bear some of the persistent limitations on intra-provincial trade, something the government has set as a priority. It will be a key area to watch, especially as some other intra-provincial tensions remain high – in the form of pipeline politics, But that’s a matter for another blog.