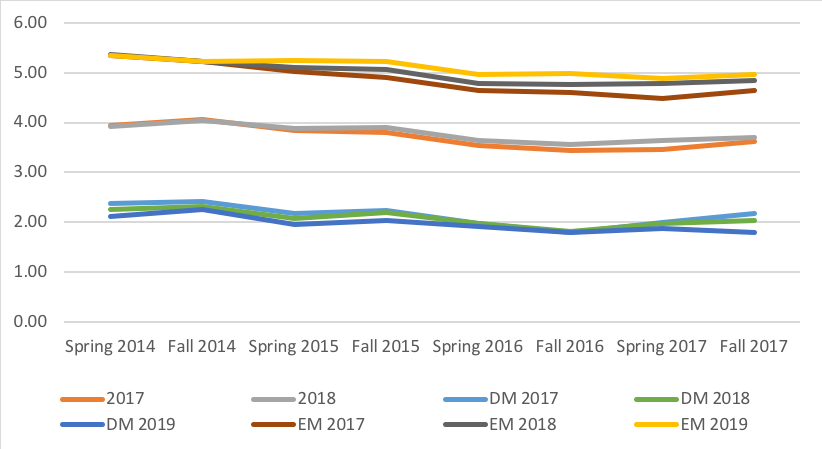 Like many economic, development and financial types, I’m planning to be in Washington D.C. this week for the Spring meetings of the International Monetary Fund and World Bank, which provide a good opportunity to take the pulse on current views on the global economy. It also provides a good chance to connect the threads of U.S. foreign and domestic economic policy, or at least try to. And I haven’t even gotten into the opportunity to better understand potential policy shifts in places like Mexico, Brazil, South Africa, Nigeria or concerns about concerning debt burdens in Ukraine, Egypt, Mozambique etc etc.

I’m expecting to find the mood cautious in the wake of divergent macro performance expectations, uncertainty around tariff, trade and investment policy, their links with sanctions and geopolitical risk that is adding to valuations and volatility of commodity markets. This will likely amplify concerns that have been present for some time about pricey equity valuations particularly in the U.S, prompting greater concerns about what to buy. I expect a lot of discussion of the recent market volatility, new entrants including cryptocurrencies, and focus on countries more exposed to the financing costs.

A few of the long list of questions follow, and I’m sure I’ll be surprised along the way.   Let me know what I missed and check back here next week for my takeaways.

My preoccupations can be broadly grouped into global growth and trade risks, investment climate interest rate and credit in the face of tightening, commodity reflation impact on balance sheets, and the upcoming sanctions timeline.

What Comes After Synchronized Global Expansion? For some quarters the narrative has been of synchronized growth and the IMF has been steadily upgrading growth expectations (Figure 1).  Now that seems to have ebbed (no big surprise), and many countries look set to have a deceleration, possibly moderate next year. How extensive could this be? Will it be accompanied with greater rebalancing or… re-widening of imbalances?  Many countries continue to have concerns about fixed investment and difficulty connecting capital to needed business or national infrastructure.

2017 and early 2018 have been generally a period of synchronized global acceleration/ expansion (Europe, U.S. Asia), with even laggards catching up a bit. After a period of at or above potential growth, 2018 is likely “as good as it gets” and global growth rates are likely to stabilize or decelerate. A moderate deceleration is not necessarily a bad thing, given that many economies including the U.S. China, much of Europe, Russia have been growing at a rate above potential, it should arguably be expected. The challenge, is that it remains to be seen if the deceleration will improve the quality of growth and prompt more rebalancing.

Another way asynchrony may play out is that a few countries that have been underperforming may continue their catch-up (mostly India and selected commodity producers in MENA, SSA and Latin America), while major economies decelerate after a strong 2017. The increase in commodity prices should help these countries, implying less of a drag and even some stimulus from the government sector. Private sector-led growth still looks more restrained.

Figure 1: IMF Growth Forecasts: Is Upgrade Cycle Near an End?

Will Global Trade Remain Resilient to Threats/Tariffs? Despite some concerns, global trade has been still running ahead of GDP growth, helped by increase U.S. imports (counter to Trump administration goals).  This likely reflected the impact of easy policies, FX trends and the fact that the bark has been much much worse than the bite, doing little to undermine supply chains (yet). Moreover currency fluctuations suggest less support of their bilateral trade with the U.S..

The pathway for 2019 might be more complicated as some of the measures already enacted may have prompted some distortions within companies and cross supply chains. I’d expect to see many countries emphasize their plan B’s especially Mexico, CPTPP members, especially given local political timelines. As of now, investment may suffer more than trade volumes, which might add to concerns about investment predictability.

Looking ahead, key deadlines on  NAFTA and China loom, as does the upcoming summit between presidents Trump and Kim, which has been linked to the updated Korus agreement. While optimists may be correct that recent tariff announcements may have been offerings for negotiation, they are also likely to increase supply chain risks and may be triggers . I’m not optimistic about reaching a NAFTA agreement in the self-imposed deadline which increases the risk of continued negotiation (or a threat of withdrawal). Expect some foreign leaders to use the meetings as an opportunity to energize congressional interests on these issues.

How many hikes and how much policy normalization? Global central banks continue to move only slowly out of their very supportive monetary policy, with U.S. hiking interest rates and the Fed beginning to shrink its balance sheet (even though BoJ and PBoC) action remain very supportive, limiting the rise in long-term rates.

Who will absorb the Increasing U.S. debt? And what impact might it have on corporate/sovereign spreads?  with the U.S. issuing a lot more debt to finance its expansionary fiscal policy, interest rates would be expected to rise, though there are still likely to be some significant buyers for US (and US denominated debt), especially among pension funds in Europe and Asia, looking to match their long-term liabilities, though some may be near their maximum capacity, and others may continue to buy such assets with FX hedges. Chinese macro policy suggests risks of planned “devaluation” or “dumping of Treasurys” both look  overstated. There are likely to be buyers of the new issuance, but rates may be higher and more volatile, adding to pressure on spreads.

In general most EM continue to have stronger balance sheets than in 2013, but generally weaker than in 2016 – inflation is is also more subdued aside from Turkey, Argentina and a few other outliers. This suggests that local central banks may have the space to keep interest rates low and cap domestic financing costs. The litany remains true –  EM divergence persists.

One key area to watch in the midst of FX volatility has been the shift in EM/Frontier debt issuance away from hard currency to local currency debt – this has meant that different players –  Argentina, and GCC/MENA now dominate issuance – the recent “issue-off” from Saudi Arabia and Qatar suggests this will continue even if a few usual suspects (Turkey) return)  Finally, I’d expect greater focus on countries that might be getting overindebted from infrastructure including from BRI loans – as well as countries like Argentina.

The improvement in oil price (even in the US) dampens corporate bond, and there’s some evidence that many producers are increasing profits more than increasing output, at least for now.

The increase in interbank funding costs experienced earlier in Q1 may prompt some discussion – so far most explanations have been narrow and technical especially since there weren’t meaningful signs of dollar shortages globally. Still its likely to come up in discussions of the resilience of the financial architecture and plumbing.

What’s next in the sanctions space? And what’s the risk to oil supply, if any?  Sanctions remain a critical foreign policy tool for the U.S. – with Russia, Iran and Venezuela cases very much in play in coming weeks and the risk of implementation issues between White House, Agencies, and Congress, which may add to uncertainty for investors.  The financial “success” of the latest round of Russia sanctions has been more extensive than I for one expected as its succeeded in increasing the risk profile of a range of Russian assets and had spillovers to global/European commodity markets to a greater extent than proponents likely hoped. While there may eventually be some assets differentiation based on profits and debt repayments, the trajectory is now titled solidly towards tighter sanctions, which may keep Russia specific risk more elevated and is likely to reinforce the use of sanctions as a primary financial tool. It remains to be seen if the pressure will result in much policy change from Russia on Crimea/Ukraine, Syria or election interference.

There are some signs that the measures  will reinforce those in Russia pushing for a resistance economy (inward facing). Its also likely to increase the reliance of quasi-private firms on government finance and increase broader Russian reliance on funding from foreign governments including China and GCC. The chance of a return to recession (as in 2014) seems low however – with a major cut to oil output and major price decline a necessary trigger.

As for other risks to oil supply, watch Venezuela and Iran. Venezuela’s implosion continues to sharply reduce output, helping other OPEC+ members exceed collective targets. Energy sector sanctions risk has probably risen, in line with statements from the Trump foreign policy team especially as some of the refineries are relying more on Canadian heavy oil despite transport shortages. The May 12 Iran deal date remains but one of a series of decisions the administration would have to make in the coming months. While outages are unlikely in the near-term, they have increased for next year. Saudi Arabia and peers would likely leap at the chance to increase oil output AND keep prices high, but its hard to see as broad global support from importers – including China and India, especially given the bilateral trade tensions with many East Asian countries.

Impact of increasing commodity prices on consumers and national balance sheets?  I’d expect most of the oil producing nations to maintain their upbeat outlook on financing, and would anticipate some increase in queries about financing for importers like India, Turkey, Pakistan and even Argentina, the big deficit countries, which look to have overvalued exchange rate.

Figure 3: Change in Fuel Cost in Local Currency (through end of March 2018)

Energy prices and some other parts of the commodity complex have risen dramatically. This will help many producers, reducing pressures on some FX pegs,  and help profits among part of the commodity complex in global equities including in the U.S. where many producers are taking profits.  However its likely to put more pressure on global consumers, especially those more reliant on diesel for transportation fuel. It may thus offset some of the income gains that have materialized from (somewhat tightening) labor markets. These trends (along with tariffs)  in turn may also start boosting labor and imput costs in the oil patch, especially in the U.S.

What did I miss?